8.9 Million People Relocated Since the Beginning of the Pandemic

2020 will go down in history as a year when a pandemic changed the world. Who could have imagined, one year ago, that so many of us would be staying home for social distancing in order to help save lives?

Specifically, one in three adults substituted some or all of their typical in-person work for telework compared to the 1 in 20 adults who worked remotely before the pandemic. With teleworking at record high levels, people are also making the decision to move for various reasons. Some of them are seeking bigger houses that offer more play space for kids and dedicated office space for them. Others are taking advantage of telework to move to more affordable homes in less dense places away from large city centers. While teleworking may continue long after the pandemic, it is obvious that far fewer people are moving for purely job-related reasons during the pandemic than they used to do pre-pandemic.

To better understand the COVID-19 impact on U.S. mobility, we collected United States Postal Service (USPS) change-of-address data from March to October 2020 for each county across the United States. Since people who want to forward their mail from their old home to their new residence file a change of address request with the USPS, this dataset serves as a good proxy on how many people have moved since the beginning of the pandemic.

Findings
Most people moved in the beginning of the pandemic and during the summer months.

As of October, 8.93 million people had filed change of address requests since the pandemic started. This is an increase of nearly 94,000 people compared to in the same period in 2019, when 8.84 million filed requests. Breaking down the data by month, most of the variation occurred in March, with 1.23 million people relocating in 2020 compared to 1.00 million a year earlier.

Taking the analysis one step further, we tracked the location of these movers at the state and county level.

Comparing inflows and outflows for the period of March to October 2020, 34 states experienced net migration gains. These states had more people moving in to the state than moving out. Although interstate migration accounts for less than one-fifth of all moves, this type of move is worth considering because of its important implications for regional demographics and economic change.

New Jersey, South Carolina and Maryland were the winners with the highest migration gains across the country. Specifically, in New Jersey, 2,032 more people moved in to the state than left. In contrast, New York, Texas, and the District of Columbia lost the most people during the pandemic. In New York, 2,847 more people moved out than moved in. However, keep in mind that the data is not a full year comparison. A 12-month comparison will be a better read about the true migratory trends. For example, we know that Texas always draw more new residents to the state every year. The period covered is over several hot summer months during which many Texans may have gone elsewhere to escape the heat. 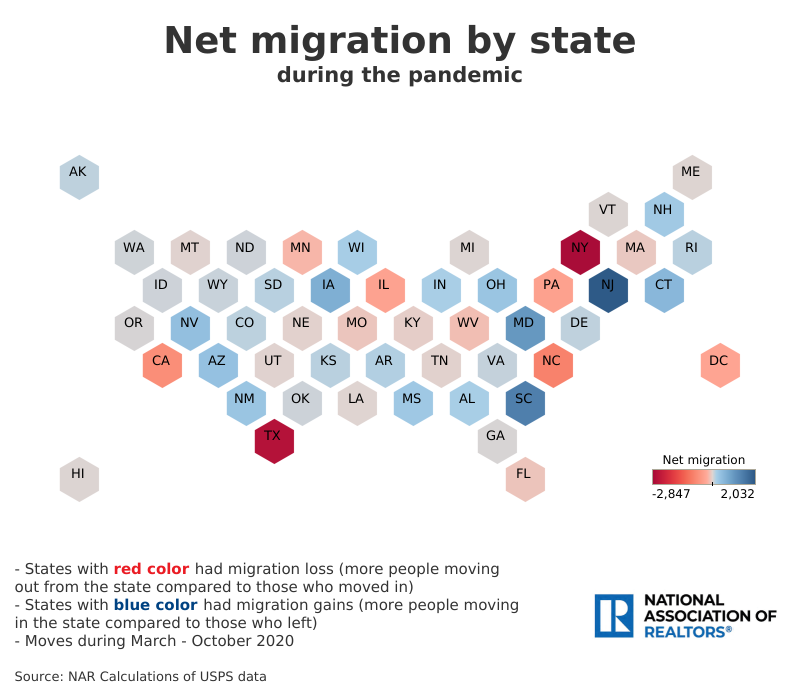 Interestingly, we see states with a declining population size in 2019 experiencing the highest migration gains during the pandemic. For instance, while the New Jersey population declined by 0.3 percent in 2019, the state gained more people during the pandemic. During March through October of 2020, New Jersey gained nearly 2,000 people compared to 1,100 a year earlier.

Compare net moves between 2020 and 2019 for the top 10 states with the highest gains/losses during the pandemic: 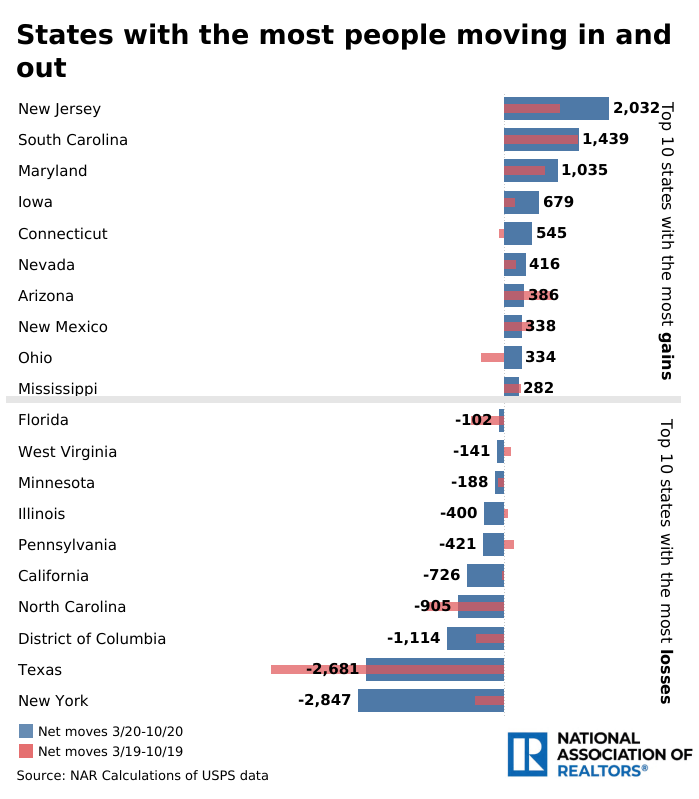 While Texas and New York had the highest moving rates, this chart shows where most of these movers relocated during the pandemic. For instance, more than 50 percent of those who left New York moved to New Jersey followed by Connecticut (12%). Respectively, the top three destinations for Texans during the pandemic were Arkansas (16%), Florida (13%) and New Mexico (9%).

Most people moved close to their home with the suburbs gaining most movers during the pandemic
According to USPS data, large cities lost the most people during the first seven months of the pandemic. Specifically, we see people moving out of some of the country’s most populous areas and relocating to the suburbs, close to their urban home. For instance, most New Yorkers moved to Brooklyn (33%), the Hamptons (29%), and Jersey City (8%). Most San Franciscans moved to a county in a radius of less than 60 miles from their previous home.

As a result, counties near big cities are experiencing the most migration gains. For instance, Williamson County in Texas—one of the most conveniently located suburbs of Austin—was the county with the highest migration gains across the country. Nearly 4,000 more people moved into the county than moved out: nearly 6,100 move-ins versus about 2,250 departures. Another example is Suffolk County in New York, which gained nearly 3,400 people during the pandemic. The biggest losers: New York County in New York and Travis, Harris, and Dallas Counties in Texas.

See the 10 counties with the highest migration gains/losses during the pandemic: 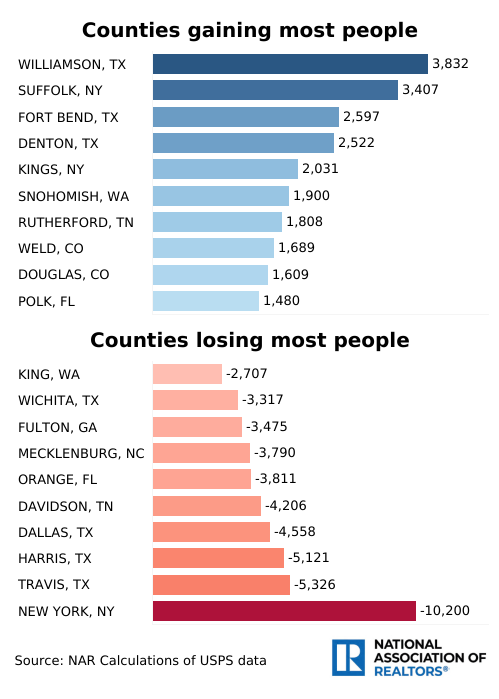 Expect similar migration patterns for 2021
The COVID-19 vaccine distribution has begun. However, experts do not predict that we’ll return to our pre-pandemic sense of normal until late 2021. In the meantime, many large companies have already announced that employees can work remotely long-term even after the pandemic. Thus, expect similar migration patterns for the first six months of 2021 and beyond with suburbs and smaller cities gaining more population.