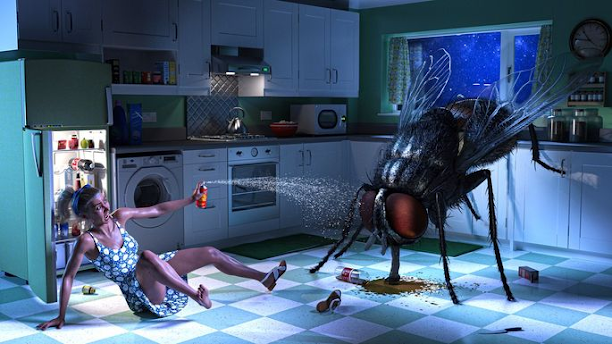 By Lauren SiebenThe truth is, many of us unknowingly live alongside bugs, mice, and plenty of other uninvited guests lurking in our homes. And when it comes to pest control, ignorance is not bliss. You need to know what you’re up against in order to prevent and evict unwanted critters.

We talked with entomologists and experts to learn everything you could be doing that unwittingly invites the creepy crawlers in. Here's what they say are the top mistakes you might be making.

If you notice an ant in the kitchen, it might not send you into full mitigation mode. Likewise, if you see one little mouse scurry across the garage, maybe you set a trap and move on with your day.

“Sometimes that works—and other times it may only be the beginning of the infestation,” says Todd Johnson, associate certified entomologist and technical services manager for Western Exterminator.

It's far easier to prevent infestations than eliminate problems after they pop up, Johnson says. Prevention is also much cheaper than removal.

“Spraying pesticides or placing traps inside the home may only temporarily correct the concern but not permanently solve the problem,” Johnson says. “Look for any issues that are attracting insects, and remove these situations to reduce attractions for pests.”

2. Not checking the doors, window screens, and seals around your house

Even with the doors shut and windows closed, it’s easy for insects to sneak inside your home.

"Due to their exoskeleton being on the outside, they can condense themselves to a smaller size to pass through very small cracks,” saysJohn Bell, product development and staff entomologist at TruGreen. He says homeowners often don’t understand how bugs get past closed doors and windows.

“I then have to show them that the door sweep is worn out, which is evident when you can see outside light shining through it, or that rips in the screen are enough for that ant to slip through,” Bell says.

“Making sure door sweeps are in good working order, fixing damaged screens, and sealing cracks and crevices around the structure with caulk can help prevent pests from entering,” he advises.

The outside of your house can be a comfy sanctuary for pests without your realizing it.

If you have overgrown landscaping like bushes or shrubs that make contact with the house, you’re unwittingly creating tons of potential hiding spots for critters. Firewood leaning against the house or garage and overgrown grassy areas are also popular havens for pests.

“Moving firewood away from the home and keeping grass mowed will make it less desirable for insects and rodents,” Johnson says.

4. Leaving out temptations for critters

If you leave the lid off your trash can or let the dog abandon a treat on your patio, you may as well send a personalized invitation to all the pests in your neighborhood.

“Critters are opportunistic,” says Ray Hess, region technical training manager at Arrow Exterminators. “If food and things to live in are left out for them, they will take full advantage of it.”

So take away the temptations: Dispose of trash in a timely manner, and don’t leave any food sitting out (whether you’re indoors or outdoors) that could appeal to pests.

5. Allowing water to pool around your yard

If water frequently pools in your yard or near your house after a heavy storm, you may want to work with a landscaper to improve your drainage system.

If you reach for the wrong pesticide, you could make your pest predicament even worse—especially if you’re dealing with ants.

“If you apply the wrong pesticide without doing research first, it can cause the ant colony to bud or ‘split’ and spread throughout the home,” Johnson says.

Do your homework before you start spraying pesticide, or reach out to a licensed pest management company to handle the pesticide application for you.

7. Not timing your efforts with the season

Sure, spring is a big season for bugs: As temperatures rise, insects become more active and reproduce, Bell explains. By summer, insects are living their best lives and thriving outside.

Then as temperatures drop, some pest populations begin to die off.

But others head inside—and into your house—to seek warmth.

“They are living creatures just like us, and they want to be warm and safe, too,” Hess says.

If you aren’t eager to play fall and winter host to a crew of rodents or a slew of spiders, double up on your efforts to close up the openings to your house. Alternatively, you can call in a professional pest control company to survey your home and close up gaps as the season changes from warm to cold.

8. Not knowing the pests unique to your area

No matter where you live in the nation, every region deals with mosquitoes, ants, and mice, Johnson says. Beyond that, pests vary from region to region.

“The South will deal more with black widow spiders and fire ants compared to the carpenter ants and hobo spiders of the Northwest,” Johnson says. “Stink bugs and spotted lanternflies of the Northeast would be a different challenge than the roof rats and drywood termites of the West Coast. “

Even within a specific region, pests can vary: “There are also some ants, like the tawny crazy ant, that have not moved to areas farther north than Georgia yet because of the susceptibility to freezing temperatures,” Bell says. “They have only been a problem in the Gulf states.”

To make sure you’re prepared to deal with your local variety of critters, do your research or work with a local pest mitigation company that has expertise in your area.